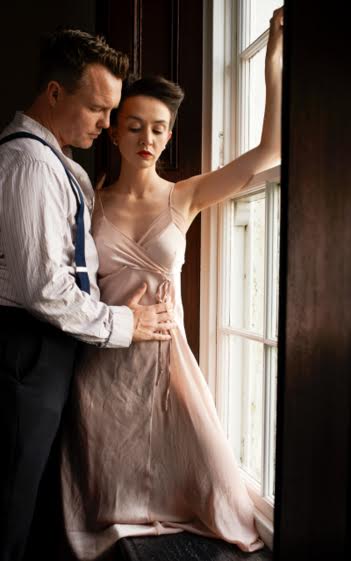 Actor Lisa Dwyer Hogg (Blackbird, Scarborough, The Fall) was director Emma Jordan’s first choice to play the eponymous Miss Julie in Prime Cut’s production of After Miss Julie. However, Lisa admits that when Emma first contacted her she wasn’t actually familiar with the adaptation.

‘I knew the story, and I love adaptations. I’d just never read the play,’ the animated, dark-haired actress explains during a break in rehearsals at the MAC. She’s waiting for her lunch and my coffee is getting cold as we chat and I scribble. ‘Then Emma sent it through to me, and I texted her back ‘wow’.’

It was love at first read through. The character of Miss Julie is, in herself, a gift for any actor – complex, damaged, the moving force behind the mechanisms of the play – but the complexities of the script itself are also a delight.

‘It’s full of twists and turns, you think one thing is going to happen and then something else does,’ Lisa says. ‘The play turns on a sixpence.’

The one thing that you can depend on? That After Miss Julie isn’t a straightforward love story –  at all. Relocated by Emma’s vision of the play to a remote stately house in Enniskillen, the events of the play unfold on VE Day. The rest of the household has gone to celebrate, leaving the aristocratic and recently jilted Miss Julie alone in the house with the servants – including the handsome chauffeur John.

‘She is looking for love,’ Lisa says. ‘And you can see why they [Miss Julie and John] find each other, but they still can’t help but be conditioned by their roles. Even as they push at those boundaries, they can’t help but self-sabotage as well.’

In the end, Lisa’s sympathies are with her character. ‘I don’t think you can play a character if you don’t like them,’ she laughs. ‘You have to find their humanity, you have to see how they got to this point. I feel for [Miss Julie], she’s really trying in the play but she just doesn’t have the tools. She’s a sexual being, but she’s no idea what that means and doesn’t have the sophistication to protect herself.’

It is a consuming role, with a lot of raw, emotional material, and Lisa admits that it can be difficult to spend all day immersing herself in the fragile, damaged role and then leave it behind when she goes home.

‘It’s your obligation as an actor, though,’ she says. ‘You have to take care of yourself-as-Lisa, so you can go in do credit to yourself-as-Julie.’

And it is important to Lisa that she does bring the best Julie to the stage that she can manage. It is only recently that the conversation about portraying women on stage has ‘reached the volume it needs to be’ and portraying a character that isn’t just strong but also damaged, is both a wonderful opportunity and a responsibility.

‘When Miss Julie [the novel by August Strindberg on which Patrick Marber’s adaptation is based] was first written, there was a sense of the ‘hysterical woman’ about the character,’ Lisa says. ‘It was limiting. In the play there’s a deeper experience of her character, and I get to present her as a full human being.’