Have your say on proposed changes to the Strangford Lough Ferry Service?

Transport NI is considering changes to the Strangford Lough Ferry Service and Newry, Mourne and Down District Council wish to consult with users of the service to get their view on the proposed changes. Council will be conducting a survey in the area on Wednesday 25th and Saturday 28th November 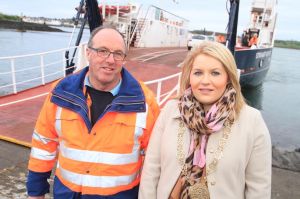 Eddie McDonnell, skipper of the Strangford Ferry, with Chairperson of Newry Mourne and Down District Council, Councillor Naomi Bailie.

The changes include providing an additional morning sailing from Portaferry at 7.20 am, however, Transport NI proposes to remove the last two sailings in the evening (Sunday to Friday) from 1 October – 31 March, to offset the cost of the additional morning sailing.  The last sailing from Strangford would therefore be 10pm and from Portaferry it would be 10.15pm. Newry, Mourne and Down District Council Chairperson, Cllr Naomi Bailie proposed the Consultation by Council to get the views of ferry users likely to be affected by the proposed changes and commented, ‘It is vital that local people and users of the service are given a chance to reflect their views on the changes. The proposals to have to have an additional sailing in the morning is very welcome but to cut the last two sailings in the evenings will drastically affect users of the service and broader tourism offering in Lecale and surrounding areas.’

Cllr Bailie continued, ‘Traders in areas across Strangford Lough and Lecale rely heavily on the footfall of visitors who use the ferry and to significantly restrict this service will have a vast impact on business opportunities in the area. This is an already restricted service which does not run around the clock. To further restrict it is madness and have a big impact on the many people who use it for access to services, school, work and socially. I encourage as many people as possible to fill out the questionnaire either in person on the days mentioned above or download a copy at www.newrymournedown.org.’