Home > What's On > Is Spector a Spectre in The Fall?

The third – and final – season of The Fall is filming now

Star spotters should keep an eye out for Gillian Anderson (fresh from reprising her role as Scully for the X-Files reboot) and Jamie Dornan (the contentious Christian Grey from 50 Shades of Grey) in Belfast, with the start of filming for season three of The Fall confirming that the iconic serial killer will be back in some form.

Season three picks up at the moment where the heart-stopping series finale left off in series two, when audiences were left reeling over the sight of Dornan’s serial killer Spector bleeding out in his nemesis Detective Superintendent Stella Gibson’s arms. Frankly, it couldn’t happen to a nastier dude – but Gibson is determined to get justice for the families of Spector’s victims, and that means keeping the bloody serial killer alive to face trial. 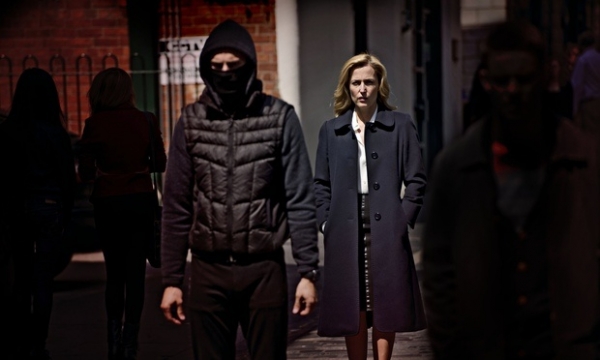 As The Fall reaches its inexorable conclusion, it’s clear that the rules of this deadly game of cat and mouse are set to shift once again.

Allan Cubitt says: ‘I’ve been on a very exciting journey over the last five years with Stella Gibson and Paul Spector – the central characters of The Fall – and I’m thrilled to have recently started filming the third instalment of their macabre, obsessive dance of death. Gillian and Jamie have lived and breathed those characters during that time and I’ve been incredibly well-served as both writer and director by their stellar performances. Obviously I don’t want to give anything away about how the third series will end but I can say that I am looking forward to working with both Gillian and Jamie again in the near future!’

The Fall is created, written and directed by Allan Cubitt, and produced by Fables in association with Artists Studio for BBC Two. It is produced by Gub Neal and Carol Moorhead. The executive producers are Patrick Irwin and Justin Thomson-Glover for Artists Studio, part of Endemol Shine Group, Stephen Wright for BBC Northern Ireland, Allan Cubitt and Gillian Anderson.