Eilish is back in the dating game and back in the courts rebuilding her law career. She has a demanding boss, a demanding life, and now a new boyfriend.  As her work and her relationship develop, Eilish finds herself embroiled in a world of hidden identity, missing documents and bras… lots of bras…

c21 Theatre Company presents a biting new comedy about the underside of the recession.  Finance and fidelity entangle in a tug-of-love to keep business afloat.  Zero hours or the hour of reckoning? 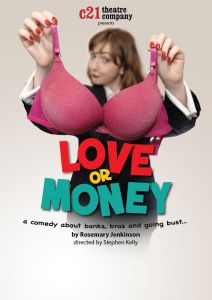 Love or Money is another satirical gem from the partnership between Rosemary Jenkinson and c21 Theatre Company, which brought you last year’s sell-out NHS-themed hit Stitched Up.  Jenkinson was inspired to write Love or Money after reading and hearing current affairs reports about the relationship between banks and business during the recession. Love or Money riotously combines the pressures of modern life with the pressures and reality of keeping the doors of business open.

Rosemary Jenkinson is a short story writer and playwright.  Her work has been produced by Rough Magic Theatre Company (Dublin), the Royal Court (London), Kabosh Productions (Belfast) and Tinderbox Theatre Company (Belfast).  She has been Playwright on Attachment to the National Theatre, London, and winner of the Oppenheim-John Downes and Peggy Ramsay Awards.

Gilly Campbell, Arts Development Officer for Drama and Dance, commented: ‘The Arts Council is committed to developing local talent in the arts sector and making the arts accessible to all.  We are delighted to support c21 with this new production which is sure to be a hit with audiences across the region as the show tours and I would encourage everyone come along and enjoy.’

Love or Money performs at the Lyric Theatre in advance of a fortnight tour of Northern Ireland from the 29th February – 12th March 2016.