Colin trained at the West of Scotland Agricultural College, Auchincruive.  Once qualified, Colin relocated to the south to work in the Savill and Valley Gardens in Windsor Great Park, where he was promoted to Head Gardener at Royal 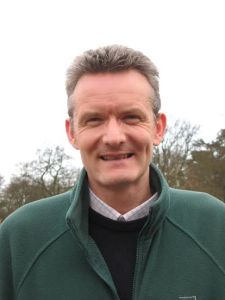 Lodge, the private residence of Her Majesty Queen Elizabeth, the Queen Mother.

Colin moved on from Savill Gardens in 1998 when he was appointed Superintendent of the Woody Ornamental Department at the Royal Horticultural Society Gardens at Wisley; a post which later included managing the Alpine Plant Department.  His career moved to the next level in 2008 when he became Garden Manager for Garden Support Services and the Coordinator for the Wisley School of Practical Horticulture, a position which he thoroughly enjoyed for two years before attaining his dream job as Curator of Royal Horticultural Society’s Garden Wisley in October 2010.

Colin has an interest in a wide range of plant groups, but lists trees, shrubs and choice woodland plants as his particular favourites and those with which he can indulge his passion in his own garden.

Be inspired, ask questions and have a chat with like-minded gardening enthusiasts. Book your tickets today call Box Office +44 (0)28 8224 7831 or online www.struleartscentre.co.uk.