Home > Travel > The Ryanair Boys are Back in Belfast

Ryanair return to Belfast, only this time they’re at the International.

Today David O’Brien from Ryanair, Europe’s favourite airline, announced what he called ‘the worst kept secret in aviation’. Ryanair, after five years in exile, are back in Belfast, with plans to base at least 3 planes at Belfast International servicing five, or more, routes. To start with, however, Ryanair have 1 based aircraft and a 4 times daily service to London Gatwick. The flights will be starting from March, but if you are planning to travel get your apps loaded now. 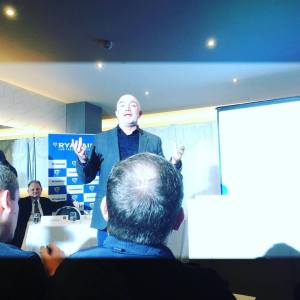 In Belfast, Ryanair’s David O’Brien said: ‘To celebrate our new Belfast International base we are releasing over 100,000 seats on sale at prices from just £9.99 for travel in March, April and May, which must be booked by Monday (11 Jan). Since these amazing low prices will be snapped up quickly, customers should log onto www.ryanair.com and avoid missing out.’

O’Brien went on to talk enthusiastically about Ryanair’s plans for Belfast International, confident that Northern Irish passengers would quickly remember why they loved the airline.

‘Our 4 x daily Belfast – Gatwick service will be ideal for both business and leisure customers and we look forward to growing routes, traffic, jobs and tourism in Belfast in the coming months and years. Our customers can look forward to further improvements in the coming months, including our personalised website, with exciting new digital features such as real customer destination reviews, under our ‘Always Getting Better’ programme, as we continue to offer so much more than just the lowest fares.’

That enthusiasm was, however, tempered by warnings – from both O’Brien and Graham Keddie, MD of Belfast International Airport – about the deleterious impact the APD (Air Passenger Duty) has on their plans to expand further. Describing Northern Ireland as ‘geographically disadvantaged’, O’Brien stated that Ryanair’s decision on the five future destinations from Belfast International would be influenced by the APD levied on the airline. Five future routes are guaranteed, but without some consideration from the government –  such as was made for KLM’s route to Amsterdam – Ryanair was not willing to take the economic risk on the longer European flights.

Keddie, MD of Belfast International Airport, said: ‘This is a significant and far-reaching announcement by Ryanair. The Gatwick slots given up by Aer Lingus as part of the IAG takeover, are being safeguarded and used for the benefit of Northern Ireland. Gatwick is growing in popularity, and it was crucial to retain them.

In addition, the promise of three based aircraft and 5 more new routes to be announced later in the year increases Northern Ireland’s ‘reach’ and gives Belfast International a competitive edge. This very positive news is the equivalent of a major inward investment without the strain on public finances. It will deliver thousands of new visitors and hundreds of welcome new jobs. Despite the damaging Air Passenger Duty (APD), this announcement shows Belfast International can defy the odds. Just imagine what we could achieve if the ‘yoke’ of APD were removed (as it has been in the Republic of Ireland)?’

Whether Northern Ireland is going to enjoy affordable flights to Barcelona or not, it is a boon to the region to have Ryanair back. As O’Brien pointed out, 864,000 NI passengers – many heading to the UK – travelled from Dublin in 2014. Now they won’t have to pay the toll down.

Now get booking! You only have until 11 January.