Mi Mundo is the third installment in Terra Nova’s Arrivals, a series of interactive*, intercultural plays that put the experiences on the non-dominant culture on the stage. It is also a fiercely, uncompromisingly good piece of theatre. As always, Terra Nova demonstrates that something can be socially important – even ‘worthy’, to use that most dreaded of terms – and still be artistically compelling.

In Mi Mundo we follow – literally as we are escorted in, around, and through the different staged locations of their life – a young couple as they meet, fall in love, and get married. In a rom-com that would be the story, a neat romantic beginning, middle, and end, but in Mi Mundo it is only the prologue. You see, Lucy is Northern Irish woman working in Peru for Habitat for Humanity, and her partner Joaquin is a native-born Peruvian dance instructor and choreographer. Their relationship is proof that culture and nationality are no obstacle to love, however it turns out that government regulations are a bit more of a hurdle. 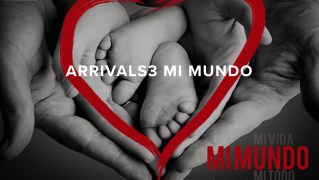 It is no easy task to take a subject that conjures up words like ‘clauses’ and ‘subsections’ and turn it into a drama. Terra Nova Playwright Andrea Montgomery manages it, with aid from a sympathetic true life story (if I had not known it was based on real events, there were a few moments were I would have assumed hyperbole for effect) and sterling, almost cinéma vérité performances from a bomb-proof cast.

Gemma Mae Halligan and Javier Rasero excel as the regulations-crossed couple, giving a tightly controlled performance – directed by Terra Nova’s Tom Finlay – that never falters. Gemma is engaging as the young lover turned fierce champion of her husband’s right to be her husband. However, it was Javier whose performance stood out for me, as he transitioned from ebulliently confident dance instructor to a man beaten down by a process that pulls the rug from under him at every opportunity. Even his body language changes, from the man who demonstrates the posture needed for salsa to one who struggles to stay upright under the weight of his fears.

The intimacy of the experience is where it convinces, taking the distancing thousand yard stare of commuters and turning it on its head. The audience is never larger than 25 people and the actors are always just arms length away. It is too close for comfort, but it is theatre so you can’t look away. The result is that you feel like a fond, silent observer – invested in the happy ending you hope they receive.

Charlotte Bosanquet (Set, Costume, Props) and Augustine Leudar (Immersive Sound Artist) do a stunning job with stagecraft that leaves the inhabitant feeling strained and off-balance. The audience shuffles between lines on the floor and squeezes into a narrow corridor obedient to directions you don’t entirely understand. Assaulted with recorded voices, the sense in them lost as more and more information is overlaid, and finding yourself following the same route again and again, you feel a psychological sympathy with Joaquin and Lucy’s struggles with the ouroboros of immigration law. A system that was designed to be broken, deportation by despair.

There was plenty of information offered – from the surprising revelation that 70% of Northern Irish citizens couldn’t afford to risk marrying a non-EU citizen to the roistering “Britishness Quiz’ that most of us failed – but the heart of the play were the people.

I was sympathetic going in, my political bent being towards liberal, but I cared as I left. Mi Mundo turned a philosophical sympathy into a genuine empathy. A feeling that Terra Nova encourages turning into actual political activism, even of the most easy sort, in their post-curtain ‘Road Show’ led by Charo Lanao, who has her own experience of the ever-changing immigration laws.

I am not sure how it would affect someone more to the right of the political spectrum, but it is hard to imagine anyone being unmoved.

*Interactive in this situation meaning moving through the space and possibly being required to answer a multi-choice question. No touching or public embarrassment involved.

You can see Mi Mundo at the following locations:

For tickets at the Spectrum centre contact 028 9050 4555 or email info@terranovaproduction.net.